We’re off again! With fully charged batteries and even more voltage at the wheels, Extreme E returns to the trails: The global racing series is heading for its second season.

It was just under three months ago that Nico Rosberg’s “Rosberg X Racing” (RXR) team secured the title in the Extreme E premiere season. Just at the finish, Johann Kristoffersson and Molly Taylor nosed ahead of Cristina Gutiérrez and Sébastien Loeb from Lewis Hamilton’s “X44” team, who were level on points.

“Winning the first Extreme E championship was just unbelievable. But our team is about more than just winning. We are also here to spread an important message,” said Nico Rosberg regarding his team’s victory before immediately turning to the future again: “One important reason for our existence is to raise awareness, educate the public and help fight climate change. We want to leave a lasting legacy that brings about local change at every location the Extreme E visits.”

In the second season of Extreme E, the focus will continue to be on this key philosophy. For team RXR – but also for the entire Extreme E racing series. As in the first year, the calendar includes not only races, but also sustainable projects to post a warning flag against climate change at the local level.

Extreme E is returning “with greater determination and more experience,” – both on and off the race track, as founder Alejandro Agag explains.

The races are once again showcasing locations where the effects of climate change are particularly apparent: In addition to places like Sardinia, which are familiar from the first series, the calendar this time also features routes in Antofagasta, Chile, and Punta del Este, Uruguay. The series kicks off with the race across the red desert sands of NEOM, Saudi Arabia. The “Desert X-Prix” is the season opener, to be held on February 19-20, 2022.

In Saudi Arabia, Extreme E is cooperating with the Ba’a Foundation, an organization that is working to protect endangered species, natural habitats and historic sites. The aim is to work together to protect sea turtles around the Red Sea – the local hawksbill sea turtle is seriously endangered by climate change.

The racing calendar includes four further destinations over the course of the year:

New tyre based on plastic bottles

As in the first season, the battle for the Extreme E Cup will once again be held under the same technical conditions for everyone. The all-electric “Odyssey 21” SUV is making its comeback – complete with an upgrade.

Continental has developed a new high-performance tyre that is designed to withstand all the rigors of the various climate zones: “We have incorporated the wealth of knowledge regarding CrossContact Extreme E from the first season into the development of the second generation, with an even greater focus on the use of sustainable and reusable materials,” explains Nels von Schnakenburg, technical manager of Extreme E at Continental.

Particularly exciting: Not only has the performance of the tyre been enhanced – sustainability has also been further improved. Around one third of the new CrossContact Extreme E tyre consists of recycled and renewable materials. Polyester yarn from 60 processed PET bottles, for instance, is used in every tyre. A further material used is silica from the ashes of rice husks.

Under the extreme conditions of the racing series, cars and tyres can show what they are capable of in a wide variety of environments. As in the pre-season, the St. Helena will sail to the various destinations and serve as a floating base for the Extreme E. In addition to accommodating the crews, it will provide the transportation for the entire global tour. Its cargo will include all the cars, a solar-powered AFC energy system, hydrogen fuel cells for emission-free electricity for the cars, and two Zenobe batteries for the power supply at the drivers’ camp.

It is not only the racing car that has undergone changes: There have also been a some personnel changes and premieres in the racing teams for the second season of the racing series. Rallycross champion Johann Kristoffersson, for example, will continue to sit behind the wheel for title holders RXR Racing. He will be joined by Mikaela Åhlin-Kottulinsky in the new season. “The opportunity to work with the winning team from the first season is really a great opportunity and I can hardly wait to get going,” says the Swedish racing driver, who last year started for Jenson Button’s JBXE team and made it to third place in the Extreme E.

Another team change relates to Christine Giampaoli Zonca, who joins Veloce Racing after starting for the Hispano Suiza Xite Energy team during preseason. “I learned a lot last year, and I think that’s important for the second season of Extreme E,” says Christine GZ, as she is also known: “Together with the team, I think we can achieve great things and we will definitely be aiming for a place on the podium and more!”

Meanwhile, motorsport giant McLaren’s team is completely new. Racing and stunt driver Tanner Foust is shooting for the top together with rally driver Emma Gilmour, who drove twice for Veloce Racing last season. “We are proud to welcome Zak Brown and his McLaren team to the second chapter of our story, and we know that they will have a huge influence that we are all looking forward to,” says Extreme-E founder Alejandro Agag. 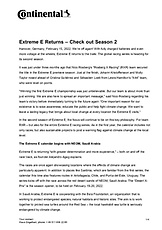