Hanover, October 24, 2021. On its fourth race weekend, the spectacular new Extreme E off-road racing series made its first guest appearance in Europe. Around 200 kilometers off the coast of Italy, Johan Kristoffersson and Molly Taylor from Rosberg X Racing secured their third victory in the fourth race and scored important points for the overall rankings. They also benefited from the bad luck of direct pursuers. The route, which led through a restricted military area at the Cape of Teulada, proved to be extremely treacherous. On the one hand, long, straight-ahead driving on stony surfaces allowed for maximum speeds, and on the other hand, numerous bumps put both tires and vehicles to a tough test. Regardless of this, the chasing teams increased the risk again in the last race before the season finale to further reduce the gap to the overall leaders. The exciting starting situation already led to numerous defects during qualifying. In the semi-finals, Carlos Sainz suffered damage to the power steering. The other semi-finals turned out to be even more dramatic, when Timmy Hansen first touched Kyle LeDuc’s ODYSSEY 21 and then the car of Cristina Gutiérrez after a daring maneuver immediately after the start. Only Kyle LeDuc survived the maneuver unscathed. The competitors’ vehicles were left severely damaged on the track. The race organizers subsequently ruled in favor of the Spanish driver. Lewis Hamilton’s X44 team made it to the final, where they met with Rosberg X Racing and a ODYSSEY 21 that had been hastily repaired, JBXE of Jenson Button, ABT Cupra XE and Segi TV Chip Ganassi Racing.

Kyle LeDuc got the best start in the final, ahead of Sébastien Loeb and Molly Taylor. Jutta Kleinschmidt was the last to start with a three-second delay, but then pushed past Mikaela Åhlin-Kottulinsky and fought a thrilling head-to-head duel with Molly Taylor. After a technical defect at Sébastien Loeb’s car, both drivers advanced to second and third place and reached the exchange zone at the same time. The second half was also spectacular. After Sébastien Loeb had handed over to Cristina Gutiérrez, the Spanish woman in the lead dropped out with her car damaged. Kristoffersson and Mattias Ekström, who continued the two-way race between Molly Taylor and Jutta Kleinschmidt after the driver change, suddenly fought for victory. The duel was decided only when Mattias Ekström lost the passenger door and then had to reduce his speed, especially during the water passages. Thus, Johann Kristoffersson secured the victory for Rosberg X Racing ahead of team ABT Cupra XE and JBXE of Jenson Button, which, after an early defect in Mikaela Åhlin-Kottulinsky’s vehicle, could no longer change the outcome of the race, but finished their laps and scored important points for the overall classification.

In the first overall ranking in the history of Extreme E, the team with Johan Kristoffersson and Molly Taylor continues to lead ahead of Sébastien Loeb and Cristina Gutiérrez. Timmy Hansen and Catie Munnings, who have just one point more than Kevin Hansen and Mikaela Åhlin-Kottulinsky in fourth place, will remain in third place. After taking part in the first final of the season, the ABT Cupra XE team with Mattias Ekström and Jutta Kleinschmidt climbs to fifth place. Kyle LeDuc and Sara Price handed over the red lantern. The Segi TV Chip Ganassi Racing team moves up two ranks and is now in seventh place.

The race continues on December 18 and 19 with the Jurassic X Prix in England. Which team will ultimately become the first Extreme E-champion in motorsport history will be decided in the final race of the season, which takes place in Bovington on England’s southern coast. The final was originally scheduled to take place in Tierra del Fuego/Patagonia, but had to be moved due to the current COVID-19 situation. 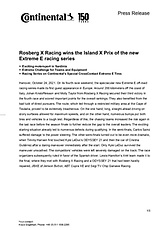 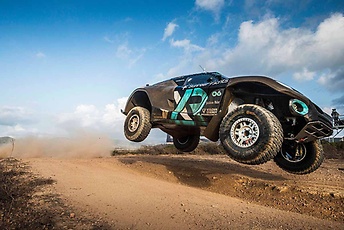