Keeping the teams and their support crews firmly on track: An ever-present “black guardian angel”

Last Saturday, 176 riders from 22 teams embarked on a 3,460-kilometer adventure that will take them through some amazingly diverse landscape, over a variety of surfaces, and most probably through all weathers – from baking heat to pouring rain, with sudden drops in temperature at altitudes of 2,000 meters and above. In this year’s Tour de France, no fewer than six teams have again chosen to put their trust in Continental’s finest tyres to carry their professional racing bikes through the longest and toughest bike race on the planet.

For the 2019 season, including the Tour de France, the Bahrain Merida, Groupama FDJ, Katusha Alpecin, Team Ineos, Team Movistar and Team Sunweb outfits have all chosen to race on the “black gold” mined or rather manufactured in Korbach. This small town in Germany lies at the source of a river of rubber that flows into tyres for everyone from the top professionals on the WorldTour circuit to a wide spectrum of amateur road racers and keen cyclists, all eager to fit their bikes with the best tyre for their needs.

The tyres for the Tour have to comply with rigorous specifications: In brief, that means designing and building a tyre that offers the lowest possible rolling resistance, coupled with extremely high puncture-resistance and, of course, optimum grip. These criteria apply whether the tyre is expected to sprint along a broad boulevard, accelerate over a stretch of gravel, bump over a cobbled section of the route, roll smoothly between fields and forests on the flat, or surge up and down amidst towering mountain peaks. The spare wheels strapped to the roofs of the team support cars are fitted with tyres to match whatever the weather forecasters have predicted for the day in question.

And in a field of the world’s finest athletes, there can be no question of compromise where their material is concerned. That applies not only to every component of the bikes themselves but also and primarily to the tyres as the sole point of contact with the road. The riders themselves and even more so their mechanics are hyper-sensitive when it comes to their tyres – and no wonder: A puncture can often spell the end of all hope of a stage win, a promising breakaway or, in worse still, a good placing in the general classification (GC).

If a rider crashes on a steep descent, because, for example, a tyre has come off the rim or begun to blister in the heat, then the impact on the outcome of the stage or the Tour as a whole can be the least of the rider’s worries. Often the immediate concern is whether there are any broken bones and then how any injuries could affect their future career. To ensure that its tyres can master virtually all eventualities under the most extreme conditions, Continental is constantly engaged in research and development work on bicycle tyres. The first to benefit from these efforts are the professionals competing on the WorldTour. But of course the findings are also fed into the series production of bike tyres for amateur cyclists as well.

The Continental Competition is a tubular tyre, or tub for short, that is suitable for all weather conditions. With a tubular tyre, the latex inner tube is stitched by hand into the tyre, which is then glued to the rim. Tubular tyres typically have slightly more rolling resistance, so Continental’s experts have been working on this perceived drawback to maximize the tyre's efficiency. The design of tubular tyres means they can be ridden at higher pressures than the more common clincher tyres.

This year, however, it’s not just the professionals from six WorldTour teams that are riding on Continental tyres. All official Tour vehicles too will be spending the next three weeks on Continental rubber as they follow the riders from Brussels to Paris. The Continental PremiumContact 6, which is manufactured in Sarreguemines, France, is fitted on the Skoda cars carrying Tour Director Cristian Prudhomme, the timekeepers and the race medics, as well as on all other official Tour cars. All the support vehicles of the Groupama FDJ team, including maintenance car and team car, are also running on the Continental PremiumContact 6.

Like the bike tyres, this summer car tyre is the perfect match for the job – a top-performance tyre for top-performing teams. In a comparative test in the latest issue of AutoBild Sportscars (No. 4/19) the PremiumContact 6 was awarded the top “exemplary” rating among the eleven size 245/45 R 18 tyres in the test line-up. Commenting on the outcome of the test, the magazine had this to say about the Continental tyre: “It’s a balanced peak performer, delivering impressive dynamic performance on wet and dry roads, steady and safe handling in the wet and dry, a precision steering response in the wet, and short wet and dry braking distances.”

For the drivers of the support vehicles, running in convoy during a bike race is no easy matter. This is not a job for Sunday drivers. There is so much potential for sudden, unpredictable events, such as a crash among a breakaway group or in the peloton. Or because one of the team cars has to squeeze by at speed to assist a rider. So the drivers of the Tour cars are expected to combine total concentration with maximum flexibility, above all on the narrow descents in the high mountain ranges. Because the Tour de France has a long tradition of putting safety first.

This is exactly where the Continental PremiumContact 6 is at its best. In the AutoBild Sportscars test, the tyre recorded high scores for safety-relevant criteria in particular. In the dry braking, aquaplaning and wet handling tests it scored very good marks, laying the foundations for the best overall rating that the magazine awards.

All of which makes the PremiumContact 6 the ideal tyre for the challenging stages of the Tour de France. This passenger car and SUV summer tyre is designed for compact-class models and above. The range currently includes 120 variants, with approvals for speeds of up to 300 km/h. So it comes as no surprise to find that the PremiumContact has been approved by numerous renowned automakers for fitting ex works. And at the Tour de France too, this Continental tyre is ever present in its role as the “black guardian angel” of the official support cars. 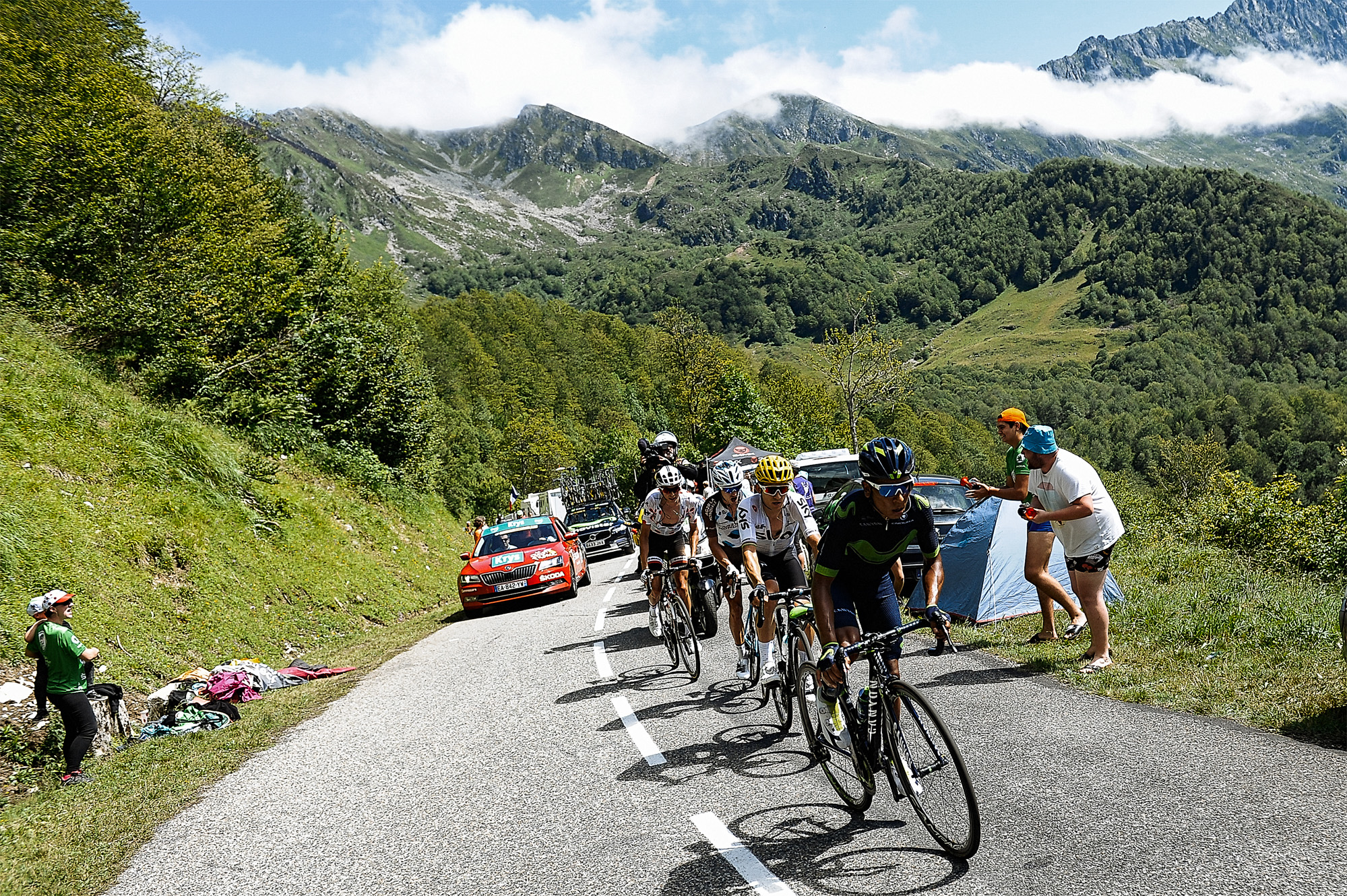